The love of a good dog is priceless … 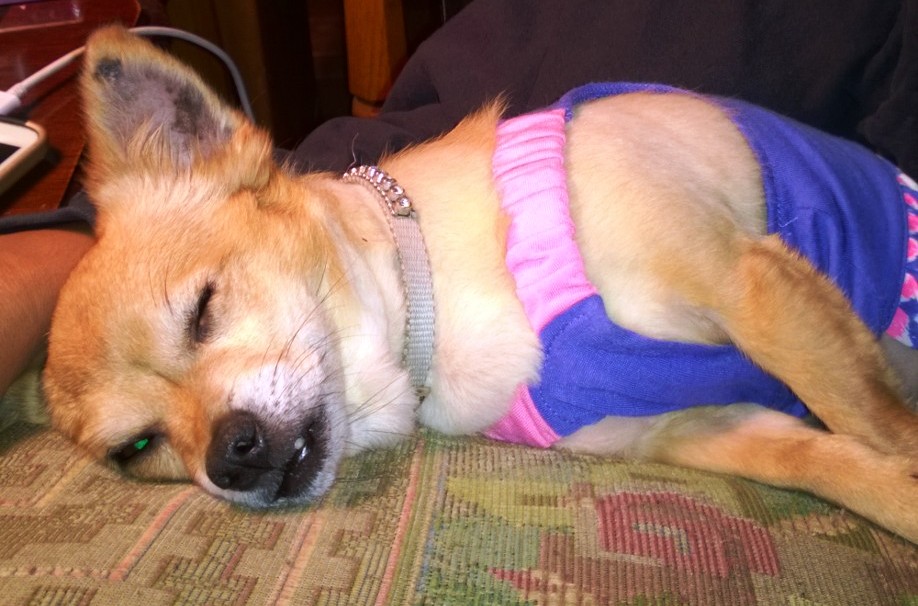 I don’t know whether I would call it love — but there was definitely something — at first sight.

There she stood in the den of my friend Gloria’s home, clearly excited; her body and head shaking like that of a miniature shaman in the midst of a ritual dance to cast out demons, summon rain, or both.

She was less than a foot tall from paws to the top of her reddish-brown head, not counting those two excited ears. Her tail wagged furiously. She seemed to be smiling, her good eye gleaming. (The other didn’t fully develop when she was born.) But it was clear she was happy.

As soon as I sat on the couch, she got a running start and jumped into my lap. I didn’t know what else to do, so I started rubbing this tiny stranger’s head. Within 15 minutes, both of us were snoring. That was the first of many times we would sleep together.

That’s how my relationship with Precious — the long-haired Chihuahua-mix — began. At first, I would only see her once a week when my wife and I visited Gloria, a member of our church, who was approaching 80 — had been a widow for 20 years — and had shared her home with Precious for the past two years; after she adopted the dog from a local shelter.

They shared such a friendship

They were quite a pair. It was clear how much they loved each other. They spent so much of their time together, Precious often perched in Gloria’s lap staring her in her face as Gloria rubbed her head.  “This dog can read my mind,”Gloria would often declare with a smile. But she was serious.

The two of them did seem to have an understanding that resembled the arrangements two humans often share. Though they spent a lot of time together, they also knew when to honor each other’s personal space and need to be alone — Gloria to listen to her jazz, play games on her computer and order things online; Precious to re-decorate her kennel, take long naps and, sometimes, just lounge quietly in the kennel as if contemplating the affairs of the world.

These two companions were comfortable with the cozy life they’d made together for the last two years, but there was something lurking in the background, slowly working its way front and center, something that would put a time limit on the living arrangements of these two devoted “friends.”

Gloria lived with an inherited neurological disorder that was slowly causing her to lose her ability to walk.

In her late 70’s, the rate of decline in her ability to control the muscles in her legs had quickened. She would often fall when moving around the house, and many of the mishaps were nasty, resulting in ugly bruises and severe pain. Precious would often come to her aid, clearly concerned, but could only fret and whine over her. I once told Gloria, “Teach her to dial 911.” She laughed.

Friends, doctors, fellow church members and others had long urged Gloria to leave her house for an assisted-living facility where she would have around-the-clock care and, likely, a better quality of life. But it was difficult for her to give up her independence.

She also knew Precious would not be able to join her at such a place and she didn’t want to leave her friend. After a few more hard falls, she reluctantly agreed it was time to go. She had seen how Precious had taken to my wife and me, and how she looked forward to our weekly visits, seeming to anticipate when we would be ringing the doorbell.

Gloria also had observed how much the two of us cared for Precious. Often, when it was time for us to go, after a visit, it was difficult for me to leave. Gloria told us about her decision to move and asked if we would take Precious.

My wife was ready to say, yes, right away. By this time, there was no doubt that I had grown extremely fond of Precious, but it was still a difficult decision for me. Some years before this, I had vowed I would never have another pet. Over a period of a few years, we had lost two beloved dogs — and the adorable cat who ran our household. All three, in succession, felled by cancer.

I had not gotten over that. And I just didn’t believe I could take the risk of getting another pet, watching it become an indispensable part of our everyday life, then experience that awful, free fall into misery while watching it die.  I believed that would be devastating for me and I didn’t want to take the risk.

To make matters worse, the second of our other pets to die was our beautiful Golden Retriever (who was such a lady). Her name, by the way: Precious. And now, here was this midget Chihuahua with my beloved Precious’ name …? Did she think she could take the real Precious’ place? Or Diamond’s, our Black Lab? Or Harley’s, our Calico cat, who had lived with us for more than 15 years, and had me wrapped around her little paw?

Precious would be homeless

But nobody else in Gloria’s circle of friends seemed anxious to take Precious, and we didn’t want her to end up in the shelter again. Especially now that she was eight years old. Older dogs have a much harder time getting adopted. Most people, it seems, prefer puppies.

We brought Precious home in early March. It didn’t take her long to adapt to the transition. Right away, she loved the larger yard we have, and kept us busy taking her out several times a day for walks around the property, to sniff out deer tracks or the scents of other critters who frequent our property.

At first, I tried to put a governor on my attachment to this small, but energetic creature, who often followed me or my wife “foot-to-foot” around the house and took frequent naps in our laps.

And I believe Gloria was right: The dog did seem to be able to read our minds. She could tell if I was troubled or a little downcast. She knew just when to join me on the sofa or in a comfortable chair, ease into my lap and find my hand with her nose; then encourage me to rub her head, back or belly. After several minutes of this, both of us were usually feeling much better.

She can make us smile so easily. She has this way of prancing up our long driveway, while frequently looking back over her narrow shoulder and appearing to smile or admonish us to pick up the pace, in a “come on, I’ve got things to do, places to see, get a move on” kind of way.

And once she’s had enough of the hot southern sun, she forces us to jog as she runs at her top speed back to the air conditioned house.

She is the sweetest dog and has been a joy to be around. Every time we take her to the vet, the staff threatens to keep her; they love having her around. She makes “people” friends every where she goes.

I always thought I couldn’t really take up with a small dog — “a lap dog.” I thought I preferred big dogs, working dogs, who were strong, muscular and protective. People with evil intent on their minds tend to think twice about approaching you when you’ve got a pair of nearly-100-pound retrievers by your side. And here I am now, perfectly content with this lightweight midget, who doesn’t even bark.

But her senses of hearing and smell are so strong, she alerts us when anything is going on outside — somebody in the driveway or approaching the house — long before they get out of their car and knock on the door.

She has been a blessing

She came to us at the right time. I was overwhelmed with challenges and scores of things I needed to take care of. A lot of the joy of life was gone for me. But Precious has me looking at life and all that stuff differently. Most of those challenges haven’t gone away, but simply don’t bother me quite as much.

Sometimes, when things start to get me down, I just try to relax on the sofa, knowing that within minutes, Precious will be there in my lap or by my side, and before I know it, we’ll both be asleep. When I wake up, things don’t seem so bad. I’ve now made room for her in my pets hall of fame, along with my buddies Diamond, Precious The First, and Harley.

Yes, she is tiny (only 7 pounds) and certainly not imposing, but even so, she is still my Big Girl.

Dogs: You gotta love ’em. Because they sure can love you.